I thought I’d been really careful.  I’d worn a mask and sanitized my hands whenever I’d been handling objects outside my home.  I’d followed all the rules and successfully managed to work in the simulator, in the classroom and stay in hotels provided by my company after the initial lockdown at the beginning of last year.  I had no contact with anyone who had had Covid and despite meeting a significant number of people very few knew of anyone who had suffered with the virus.

Then, at the beginning of December 2020, I woke up one morning and I didn’t feel right.  My arms and legs ached and I felt ‘under the weather’.   I had a standard flu inoculation a few days before and I thought this might be an adverse reaction to that.  As the days passed, I started to get other indications that things were not quite right: I lost my appetite, I felt tired all the time and I had an overall feeling of being unwell.  None of these are on the list of ‘classic’ Covid symptoms so the thought that I had the virus did not occur to me.

Fortunately, I had signed-up to a Covid-19 study in which you upload information daily to an app about how you are feeling.  After 3 days of inputting this data, the app advised me to get a Covid test.  The study for which this app provides data has the authority to authorise Covid tests despite not having the ‘classic’ symptoms which the Government normally requires before allowing a test.  The C-19 Study has identified dozens of Covid symptoms in addition those nominated by the Government.  I had the test on 15 Dec and was notified 2 days later that I had tested positive for Covid 19.  I had already imposed a self-isolation on myself and I was now notified officially to do so.

For about a week I remained at home with no significant change to how I felt.  My limbs stopped aching but the general feeling of malaise remained and I couldn’t focus on doing anything at all and I had no energy to do anything even if I wanted to.  By 21 Dec I was feeling worse.  I was becoming breathless with any exercise and I needed to sit down after walking up the stairs.  I had a video-consultation with a doctor who prescribed an inhaler to help my breathing. I woke on 22 Dec knowing that there was now something seriously wrong with me.  I was finding walking difficult with me becoming breathless very quickly.  I called NHS111 who very quickly said they would get my GP to call me.

That call came through very quickly.  My GP immediately decided that he needed to see me and arranged a consultation in the surgery carpark.  He came to the car dressed in full PPE and slipped an oximeter on my finger.  He thought the device was not working properly and returned to the surgery for a replacement.  He brought out 2 other oximeters and it was only when all 3 returned the same result of really low oxygen levels in my blood that he said that I needed to be in hospital immediately.

By that stage, I knew that hospital was going to be the answer.  I was feeling really unwell.  On the way to hospital, I could feel myself deteriorating further and knowing that no visitors or assistance were allowed inside the hospital, I wrote my name, and doctor’s details on my phone.  I was dropped off right outside the entrance to the Horton Hospital in Banbury with about 20 paces to the door.  I only just made it inside.  As I entered, I started feeling dizzy.  A passing nurse asked if I was ok to which I obviously replied “Yes, I’m fine”.  “I don’t think you are” she replied and guided me towards a wheel chair.  Once I sat down, I was really short of breath and I could not speak.  I was glad that I’d written my details on the phone.

The next thing I remember is being in a small consulting room with a fairly large group of nurses and doctors working around me.  I already had an oxygen mask on and a canula had been inserted into both forearms.  After a short time on the oxygen, I began to feel much better and could hold a conversation with those around me.  All sorts of tests were done: blood drained, Covid test, a test for MRSA, an ECG and x-rays of my chest are the ones I remember.  Results came back showing that I definitely had Covid and that it was seriously affecting my body.

There were indications on the x-ray that my lungs had taken a bit of a battering explaining the shortage of breath and the blood tests showed that my kidneys and liver had been adversely affected.  Furthermore, my potassium level was dangerously low.  Potassium is used by the body to control and regulate heart rate and I had almost none.  Two hours passed in the consulting room during which time I acquired an additional canula in my right wrist, a canula with 4 inputs in my femoral artery in my groin, a catheter as I was going to be bed-bound for a while, an oximeter on one of my fingers and permanent wiring for an ECG.

At the end of the 2 hours, a consultant and 3 other doctors came to tell me what was required.  I was to be admitted to the Critical Care Unit (CCU) where oxygen under pressure could be administered to me.  They had been granted permission for me to be given Remdesivir an anti-viral drug.  I was also put on steroids to help my lungs recover and a cocktail of other drugs to help my kidneys and liver.  Some others drugs helped offset the adverse effects of those designed to help me.  I was then wheeled in my bed around to CCU where the complicated process of getting me off the bed I had been on and onto the CCU bed began.  I was quite happy that I could manage to get myself across but it took 4 nurses to ensure that all the gubbins that was attached to me moved at the same time.

Once settled into my CCU bed a vice-like plastic contraption was fitted to my head and an oxygen mask fitted quite firmly to my face.  Oxygen was then provided at quite high pressure.  I was thankful then for all the hours I had spent at RAF North Luffenham when I was in the RAF being taught and practising pressure breathing.  Pressure breathing requires the body to do the reverse of normal breathing.  Normally your diaphragm moves down to suck air into the lungs and you then relax to allow the air to be exhaled.  With pressure breathing, when you relax the oxygen is forced in to inflate your lungs.  You then have to use your diaphragm in the reverse sense to force the air out against the incoming pressure.  I took to it in the CCU like a duck to water.  I knew what I was doing, but more importantly I could feel the therapeutic effects almost immediately.  I knew then that I was going to be ok.

I spent 9 days in the CCU.  The combination of pressure breathing and drugs gradually made an impression and I slowly began to feel better.  As the days went by, the pressure of the oxygen was gradually reduced as my lungs regained some of their ability to absorb oxygen.  Eventually, I was taken off the pressure breathing completely and was just given supplemental oxygen at ambient pressure.  My lungs were still not up to doing everything by themselves.  About the same time as the oxygen was changed, I began to feel as if I was actually getting better.  I will leave you to complete the second alliterative word here but since arriving at the hospital I had been feeling shockingly s***.  Really unwell. I now knew there was something wrong but not that bad anymore.

Once the doctors were happy with my progress, I was released from the CCU into a general Covid ward.  Here the staff tried to wean me off the oxygen altogether; a precondition being allowed to go home.  However, they found that the oxygen levels in my blood were insufficient without some oxygen.  I was sent for a CT scan which revealed that the damage the Covid had done my lungs had caused a Pulmonary Embolism and this clot was now preventing my lungs from absorbing oxygen properly.  The answer was to increase the dose of the blood thinning drug I was already on.  The ‘standard’ dose of Delteparin is 5000 units twice a day.  I was prescribed the maximum dose of 10,000 units twice a day.  This always caused a delay when the pharmacy nurse came around because they had never seen such a large dosage before and always double-checked with the doctor before giving me the injection.  The Delteparin had the desired effect and after a few days I was given a release chit and allowed home after 14 days in hospital.

I am at home now, but far from being fully recovered.  I still take pills to thin my blood to ensure the embolism diminishes completely.  I’ll be on those for another 3 months at least.  I still get short of breath and will continue to be like that until my lungs fully recover.  I am really grateful to all the staff at the Horton Hospital who undoubtedly saved my life.  My regret is that I do not know what any of them look like.  All the nurses and doctors were double-wrapped in PPE with masks and visors.  Apart from their eyes I know nothing about their features.  I could walk past them in a street in Banbury and not know that they played such a big part in my survival.  I have set myself a task once I am fit to find out who they all are.

Covid affects people in many different ways.  You do not know how it will affect you until you get it.  Please, please do all you can to avoid getting this virus.  It is a killer and you do` NOT want it. 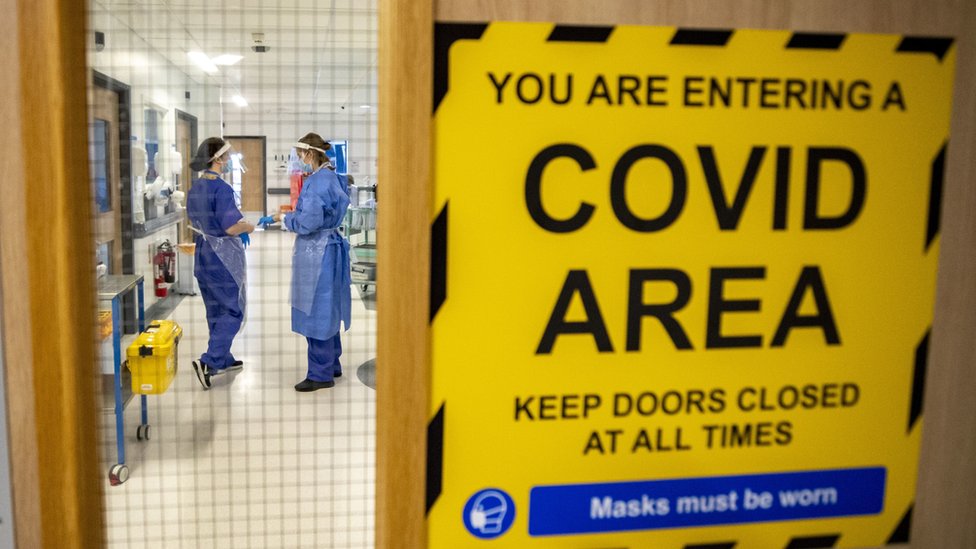